The Code Generation 2011 conference was held two weeks ago in Cambridge (UK). This conference is every years most important event within the area of Model Driven Engineering. A place where the top of the world unites to discuss this particular field of interest. I had the honor to represent the company I work for (Nspyre) at this event.

The three-days during conference was held on the Murray Edwards college, just outside the center of Cambridge. The journey to England started Tuesday night (24th of May) with a flight to London Stansted, a train ride to Cambridge and taking a taxi to the hotel which was about 20 minutes walking away from the college. A short visit to the local pub to drink a typical English pint and a quick preparation for the next day completed the day.

The conference started the next morning with a welcome speech by the organisation. The atmosphere was quite friendly and amusing with a handful of jokes by the speaker. It seemed that about 120 people from all around the world had attended the conference, so large enough but still very accessible. The sessions for the day consisted of answering the question whether code generation from UML models can be efficient, an overview of existing and new functionality of Obeo Designer and a panel discussion about the dilemma whether a company should be developing it’s own Domain Specific Languages. The day ended with a very well organized punting trip, a boot trip similar to gondolas in Venice. 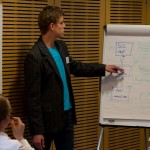 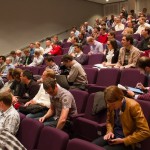 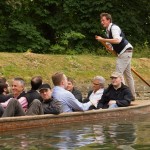 Terrence Parr, the spiritual father of ANTLR, opened the second day of the conference. His most important message was that we, as being software developers, should always automate the activities we perform more than once. It proofed to be a very entertaining keynote speech. Other cool sessions were the presentation about practical experience in building software factories, an overview of functionality of Acceleo and a discussion about how to make Model Driven Engineering to live up to its promise. After these interesting sessions the organisation treated us with a delicious diner to end the day.

The last day was opened with a keynote of Ed Merks, project leader of the Eclipse Modeling project. Ed treated us with an interesting view on models and DSLs based on his experiences when developing EMF. A hands-on Jetbrains MPS workshop and a discussion of applying code generation as a normal programming practice were interesting warm-ups for the closing panel session of the conference. The panel consisted of Johan den Haan, Jos Warmer, Wim Bast and Andrew Watson. The discussion was led by Markus Voelter. The result was a very active and vivid discussion about the future of Model Driven Engineering for the next 5 years.

Right after the last presentation, I quickly headed to the train station to catch the train to Londen Stansted. Just one short night stay in a hotel close to the airport, before flying back to Eindhoven. I am looking back at a very fun, useful and educating conference. It is not that I have learned a lot of new things, but above all  I have received confirmation that we are definitely proceeding in the right direction!

As far as I am concerned, a very successful event! Great to be there representing Nspyre!

Comments feed for this article